If we are to continue to survive on this planet, we must return to this state of ‘being’ .

Melanin has been described as the color of life.

It is the ‘universal pigment’ found in skin, fur, hair, eyes; the teal feathers of tui, a blooming lily, and the spots on a browning banana. Its link to human health is fact. And because it is present in all living organisms, it is linked very clearly to biological survival throughout the ages. Today, it is being presented as an architectural response in an age of climate change as key to human survival on Earth.

Led by Ravi Naidoo, The Mediated Matter Group’s installation Totems on display at the XXII Triennale di Milano envisions a future when designers will use laboratory created melanin  to build glass windows that deepen or lighten in response to the sun like our own skin. He argues that not only is melanin the “colour of life”, but potentially the foundation of our future habitats in a world facing climate change.

The project was thought up by prolific designer, and “biological goth” Neri Oxman, who has dedicated her career to exploring the potentials of material ecology- that is, by marrying computational design, synthetic biology and digital fabrication to produce biological structures. Her work explores biodiversity, and how we embrace this through design. Her research at MIT has seen the development of numerous “living materials”, bio-inspired designs responsive to their environment, including melanin-impregnated material activated into varying colors with exposure to UV radiation (sunlight). 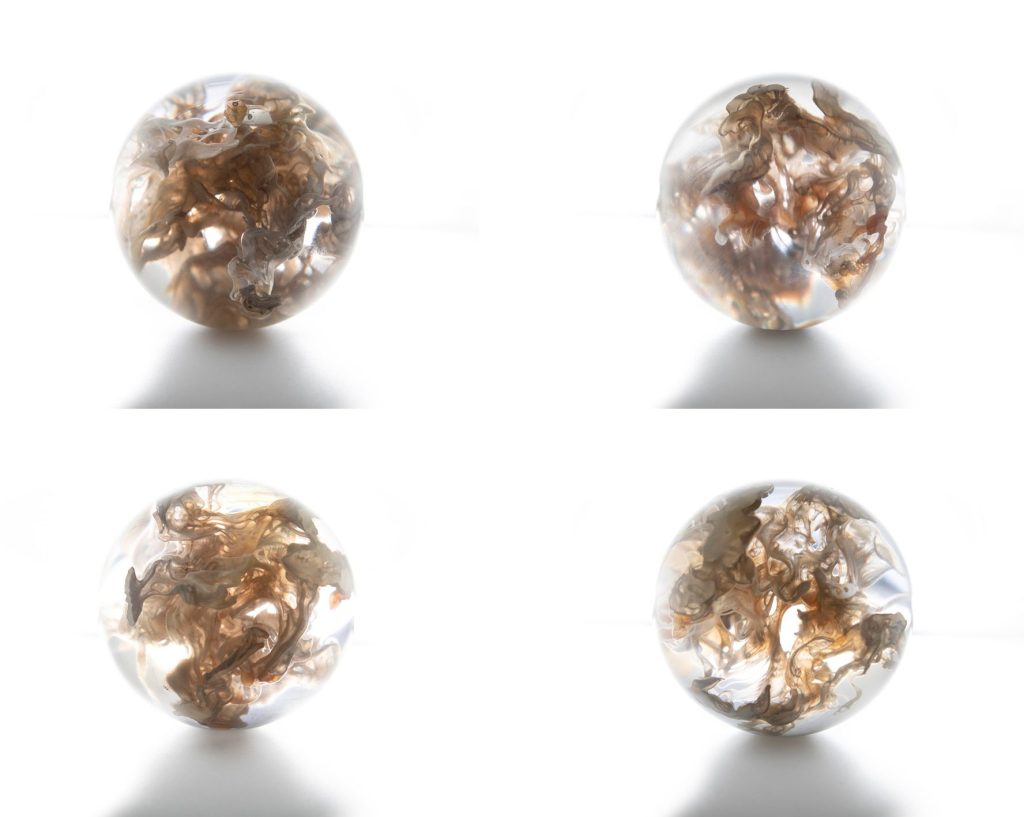 On the name of the project, Totems, Oxman explains. “Our use of the word is rooted in admiration and respect of and for all things alive materially and immaterially—and for the wisdom of the Ojibwe people, who coined the word, as well as other First Nation peoples, who, unlike us, saw and felt and connected with this synergy,” writes Oxman. “In our project, we are revisiting the Totem as we acknowledge and commemorate diversity through biological (and chemical) diversity so essential to life on earth. If we are to continue to survive on this planet, we must return to this state of ‘being’ and universal wisdom previously recognized by indigenous peoples to whom this project is dedicated.”

The project Totems can be understood then as a clear exploration of the minute and miraculous, allowing us to reflect on our connection to all life on Earth, and thus the stakes at hand.

The synthesized pigment merges 3D printing and design computation with chemistry, resulting in a ‘chemical Totem’ –  a reaction initiated by tyrosinase, a mushroom-derived enzyme that leads to color formations that shift and deepen as the sun stretches across the sky

This experimental material is now proposed as an architectural element: melanin-infused glass.

Designed to contain multiple types of melanin sourced from a variety of samples, including human hair, fish inks, mushrooms, feathers, and other sources, the bio-inspired material is currently shown across a small series of spherical objects featuring a single or multiple connected channel filled with liquid melanin, each showcasing a wide range of colors with their own unique light absorption properties. The hope is that in time, liquid melanin would be incorporated into larger sheets of glass and used as transparent architectural surfaces as responsive and adaptive to the elements as our own skin.

The Mediated Matter Group proposes that their several – story glass structure could contain multiple types of melanin, including some obtained from the organisms and users who use the site. Once built, it could help shield species from UV radiation during the day.

In a world facing the inevitability of climate change, this facade is a creative, modern take on the Noah’s Ark story which could allow us to protect some the world’s most vulnerable species and habitats.

Totems is an interesting reflection on the long and crucial intersection between nature and culture, which raises a number of key fundamental philosophical questions: In an age when we can engineer melanin, who owns biological colour? What are the implications of its capabilities, both culturally and biologically? What is its promises, and what are its perils?

Part of our fascination with this project is the endless investigation it prompts. Here, we can continually question our ongoing relationship with our collective biological and natural history, and really think about the age we are stepping into here on Earth.