Puke Ariki is the gateway to the rest of the district.

Throughout Taranaki’s history the Puke Ariki hill, resting at the mouth of the Huatoki, has been a significant site for mana whenua and settler alike. Today we see Puke Ariki museum, New Plymouth’s civic jewel sat snug amongst the nikau.

Recent celebrations marked 100 years since the opening of the New Plymouth Museum, which moved across the street and changed it’s name at the turn of the century.

In the early 90’s, with only 5% of its collection on display, the New Plymouth Museum had well and truly run out of space. The $26 million dollar project to expand New Plymouth’s museum and library facilities began in 1997, with Boon Goldsmith Jackson’s Paul Goldsmith leading the way.

Since its opening in 2003, Puke Ariki has welcomed thousands of visitors each year. It’s safe to say that it has been a huge success.

A front view of the Puke Ariki model

Puke Ariki’s opening at the turn of the millennium was part of an exciting time in New Plymouth’s story, and one that Goldsmith feels was especially significant to our town’s history.

To him, the turn of the millennium signalled a distinct civic renaissance in New Plymouth. With the Govett Brewster, foreshore walkway and Puke Ariki all being constructed simultaneously, it’s clear to see that some of our most cherished community assets emerged around the same time.

An original water painting envisioning the connection between Puke Ariki and the foreshore.

The work done to provide  civic infrastructure and institutions had been something that passionate people across the region had been working to realise for years.

Not a fluke at all, the thriving cultural and urban developments were a result of the hard work of dedicated place-makers throughout Taranaki. The result of which has left New Plymouth with some of its most recognisable sites. Our varied and beautiful set of art, culture and leisure institutions is truly to the credit of these people.

Always with an eye toward the future, Goldsmith says selecting the site at 1 Ariki street was a no-brainer. Straddled between city and sea, the museum was geared to impress from the outset.

Originally a hilltop pā site for Te Atiawa, Puke Ariki was a prime fortified area which views stretched along the coast. In colonial times, the pā was excavated extensively by the Plymouth Company for land reclamation of the Huatoki bay to form the railway yards – the last remnants of which can be seen at the bottom of the landing.

The decision was made early for the re-establishment of  the hill formation, which has certainly given Puke Ariki a powerful presence, emulating the mana of the former pā site.

Today our region’s collection of stories lies beneath canopies which reach out toward the sea, atop a journey of stairs. And at the heart of its powerful form is its elevated location, which honours its history with mana whenua, who’s Taonga Collection rests at the very top of the museum.

We appreciated that it was the hill of the chief…to amass the building up to look over the sea and give it its strategic presence again was a good metaphor for the hill.

And for mana whenua involved in the formative and still active committee, Paul said this site is especially important to  “keep the fires burning, keep that presence”.

The potential for the museum’s significantly larger facilities to tell the diverse stories of the region was at the forefront of Goldsmith’s mind throughout the project. He vehemently describes his role as merely constructing a vessel for the community. It’s a powerful vessel, too.  Through its extensive contemporary facilities, it has the capacity to house, tell and honour the stories of this region.

But it’s all too easy to let the momentum slip, Goldsmith says. In order to keep the urban potential of the museum buzzing, we have to keep playing around with the site to bring in more visitors.

What could that mean? In the original design, Puke Ariki connected both city and sea, stretching from the library and research centre to a sky bridge which touched down onto the walkway. Although this was not completed in its initial construction, Goldsmith jokes he still has all the measurements and drawings and would love for someone to take the idea and run with it.

An initial drawing of the ‘city to sea’ project from the New Plymouth Library, through Puke Ariki to the foreshore.

Evolving Puke Ariki and its connection to the foreshore could keep that whole place buzzing for years. But it’ll be forgotten if you don’t keep playing around with it. 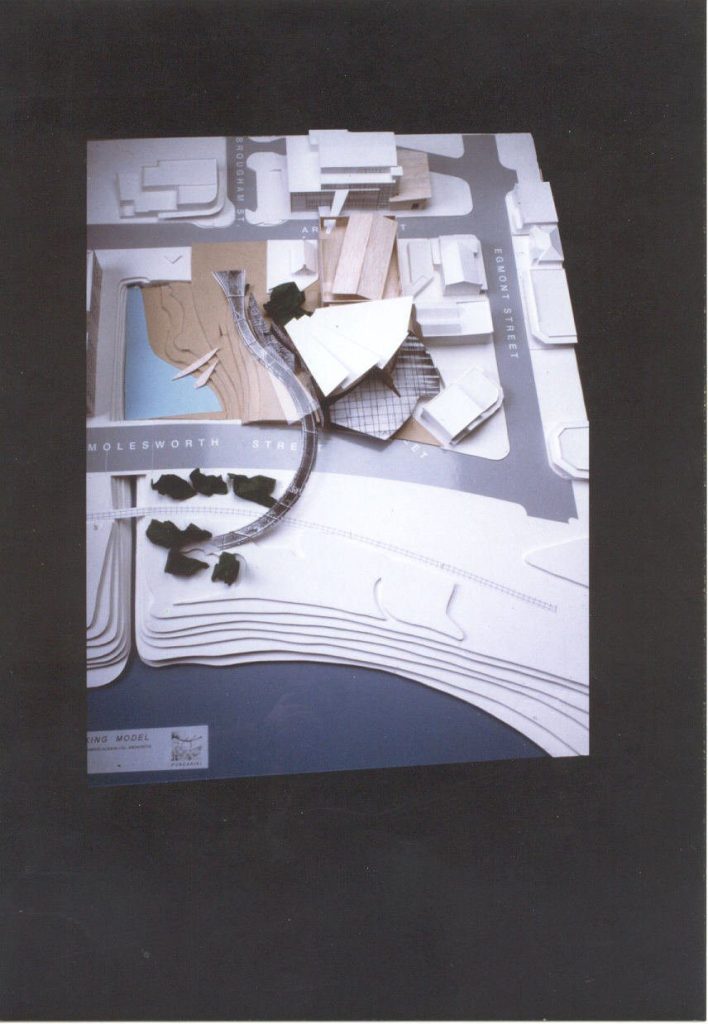 An aerial view of the ‘city to sea’ connection on an original model.

Its all about keeping the story going, he says.

How is our museum keeping its stories alive? There is some toying with the idea of establishing “satellite” spaces  throughout Taranaki. One at the fore of proposal is in Waitara, where they propose returning their taonga held at Puke Ariki back home to tell their own stories.

This prospective project has the potential for Puke Ariki to truly live up to its civic potential: to act as a gateway to the rest of the district.

“It’s not a threat, it’s an opportunity”.

There is always great community events on at Puke Ariki, Find out about the whats happening here here.